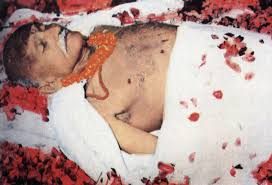 NO POST MORTEM MARK- OR BULLET MARK, VERY SOON THE NATION WILL COME TO KNOW THAT NEHRU WAS THE CONSPIRATOR IN THE ASSASINATION IN MAHATMA GANDHI- WHAT WAS HIS HURRY TO HANG HIM SO FAST?
IN ANY OTHER COUNTRY CONGRESS WOULD HAVE BEEN DECLARED ANTI NATIONAL= WHAT Sri Sukhbir is saying is RIGHT.
NEHRU'SCONGRESS CREATED THE FOLLOWING MESS- MANY ARE YET TO COME OUT:
1= They suppressed the SHRI NETAJI'S FACTS-In an interview to BBC in February 1955, Babasaheb elucidated the reason why the British left India in 1947. Subsequently, Attlee agreed Netaji was the toughest challenge the Empire faced. Several defence and intelligence experts agreed, too."I don't know how Mr Attlee suddenly agreed to give India independence," wondered Ambedkar, recalling then British Prime Minister's decision to agree to the transfer of power in 1947. "That is a secret that he will disclose in his autobiography. None expected that he would do that," he added.Sir Norman Smith, Director, Intelligence Bureau, noted in a secret report of November 1945: "The situation in respect of the Indian National Army is one which warrants disquiet. There has seldom been a matter which has attracted so much Indian public interest and, it is safe to say, sympathy… the threat to the security of the Indian Army is one which it would be unwise to ignore."
Lt General SK Sinha, former Governor of Jammu & Kashmir and Assam, one of the only three Indian officers posted in the Directorate of Military Operations in New Delhi in 1946, made this observation in 1976. "There was considerable sympathy for the INA within the Army… It is true that fears of another 1857 had begun to haunt the British in 1946."Agreeing with this contention were a number of British MPs who met British Prime Minister Clement Attlee in February 1946. "There are two alternative ways of meeting this common desire (a) that we should arrange to get out, (b) that we should wait to be driven out. In regard to (b), the loyalty of the Indian Army is open to question; the INA have become national heroes…"
2- THEY CREATED THE PARTITION- close friend of Nehru and Mountbatten- brain behind Partition

Who is responsible for partition of India in 1947?

Who is he, you ask?
He is the man who was instrumental in drawing the line between India and Pakistan.
He had the most daunting task at hand which was to draw the lines between Punjab and Bengal. And that was nothing enviable.
The only census statistics he had at his disposal was that of one done in 1931, which was unreliable.
His acts indirectly caused a huge uproar and eventually to the death of half a million people. He was so tremendously guilt ridden that he refused the salary of 3000 pounds set for his committee.  He wrote to his nephew

"I am going to see Mountbatten sworn as the first Governor General of the Indian Union at the Viceroy's house in the morning and then I station myself firmly on the Delhi airport until an aeroplane from England comes along. Nobody in India will love me... and there will be roughly 80 million people with a grievance who will begin looking for me. I do not want them to find me. I have worked and traveled and sweated - oh I have sweated all the time."

'' When people hurt you Over and Over think of them as Sand paper.
They Scratch & hurt you, but in the end you are polished and they are finished. ''
"Keep away from people who try to belittle your ambitions. Small people always do that, but the really great ones make you feel that you too, can become great."- Mark Twain.
யாம் பெற்ற இன்பம் பெருக  வையகம்