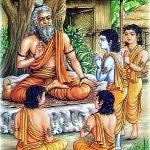 It is only in sorrow that we realise who is dear to us. Dhritarashtra is unhappy and unable to sleep. He sends for Vidura, though it is well past midnight. He wants to talk to his half-brother Vidura, for he has foresight and is just. Vidura arrives and answers Dhritarashtra's questions. He tells him that one should be impartial and just while making up one's mind. One should not tilt towards one's dear ones. Dhritarashtra has erred in supporting his son, knowing well that Duryodhana's quest is unjust. As a father, it is his duty to advise his son rightly. Vidura's words of advice have validity even today, said Kidambi Narayanan.

Vidura says the body is like a chariot and gnana is the charioteer. Our senses are like horses. Gnana is what controls the senses. He points out that in Dhritarashtra's case, he has allowed his affection for his son to rule his life, thus depriving Yudhishtira of his kingdom. In all ways, Yudhishtira is more worthy of the kingdom than Duryodhana.
One who is ruled by his senses and not by sense becomes disturbed in mind. He who desires what belongs to others loses sleep. A man whose opponent is strong loses sleep, Vidura tells Dhritarashtra. In the dispute between the Pandavas and the Kauravas, the latter are facing a strong enemy. The Kauravas are also coveting a kingdom that is not theirs rightfully. And when Dhritarashtra has been supportive of his sons' wrong desires and actions, he goes without sleep.

Vidura lists the qualities a ruler should possess: he should be righteous, generous and brave, and he should know how to protect his subjects; he should be learned. On all these counts, Yudhishtira is superior to Duryodhana, says Vidura. On the one hand are the Pandavas — Yudhishtira, who never wavers from the path of righteousness; strong Bhima; Arjuna, the master archer; and the twins Nakula and Sahadeva. But with Duryodhana are deceitful people like Sakuni. Would it be proper to entrust the kingdom to them, Vidura asks Dhritarashtra. Thus, the cause for Dhritarashtra's distress is Dhritarashtra himself.
http://www.thehindu.com/life-and-style/religion/article3013540.ece
Thanks & Regards,
Posted by K. hariharan at 18:17